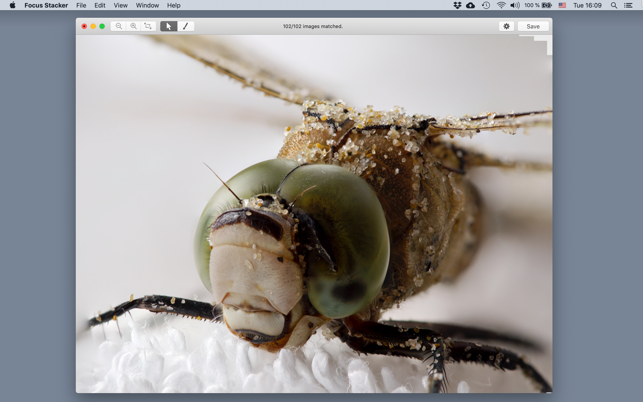 Wax plant picture was done with it, as well as some other shots in that thread.

But You are correct, of course. Another option I never tried is Enfuse implemented in Hugin.

I used the 30 day trial of Zerene Stacker, and contemplate buying a student or personal license. It works extremely well and can handle a large stack of images on my limited system memory. It exceeds the stacking I could do in Photoshop alone in both speed and number of photos stacked. Combine ZP is free and very good.

Download and instructions here. There's also some good info here. Edited by Pirate - 08 July at Fluidr Airplane-Pictures RedBubble. Many of these specialized tools have terrible UI and does not integrate well in other software packages. But if your after focusing stacking for macro beyond you don't have much choice. I'v used focus stacking in CS not for macro for product shots and it works far better then the dedicated tools in terms of speed and UI. Alex H - thanks ever so much for the suggestions, really appreciate your detailed input.

Could well be tempted to invest once the free trial ends.

Tricky01 wrote: Alex H - thanks ever so much for the suggestions, really appreciate your detailed input. Well it certainly has improved over time, for macro stacking it's excellent. For anyone owning photoshop which many photographers do the need of external software might not be needed as their focus stacking is actually quite good. I agree, but the biggest problem for me with Photoshop is that it doesn't handle resources as efficiently as Zerene Stacker does.

I would recommend that flash is used rather than continuous lighting because it is better in quite a few ways: more powerful, less heat and capable of stopping action when the flash is the primary light source A bellows might be another option however, there are some very important problems using a bellows with modern lenses.

It is difficult to stop down a lens unless here is an electrical connection between the lens and the camera. Many most bellows do not have this type of connection. However, you can often use an enlarging lens on a bellows for some very great image ratio images. The enlarging lens can be focused wide open and then stopped down manually. It needs no electrical connection to the camera. I will just point out that some of the most amazing of the nearly-microscopic, incredibly detailed images that you're seeing were probably taken with the Canon MP-E 65mm x macro lens.

That lens has no peer. It's output is incredible, with the LOWER end of its magnification, 1x, starting where most other macro lenses leave off. But it's very specialized, expensive, and learning to use it takes a lot of patience. So most people don't go that route until they are proficient with a regular macro lens, and are certain this is an area they want to pursue in depth.

Louise, Yes, I do many of my flower macros indoors, both to avoid motion and to have control over lighting. The software will align the images, but it can only manage very small amounts of motion.

For more than magnification, I rely on a set of Kenko tubes, which give me 12mm to 68mm of extension. Depending on the lens I use, that can get me to a bit over magnification. In practice, I rarely do that much. Most of mine are limited to 36mm of extension, like the one I will post below. Quite a number of people use the Canon MP-E 65, which will provide up to magnification.

Stacking images of bugs is extremely difficult. I suspect that some of the extreme one you see are dead bugs. In the field, it is very hard to get images well enough aligned to allow for good stacking.

I know some people who do it, but I am not steady enough and generally can't. Louise, I have been experimenting with focus stacking for a while now and use the following: - 1 Camera mounted on steady tripod pretty obvious I know 2 Camera EOS 7D with mm macro 3 Nexus 7 tablet, loaded with Helicon Remote Android app , tethered and controlling focus stepping on the camera. I also have used Combine ZP a free image stacking program as an alternative to CS6 and had good results with it. The Helicon Remote app comes in a number of flavours. I use the Android version because a tablet is much easier to use in the wild.

My laptop was a bit too bulky and awkward Additionally, the Android app can be downloaded independent of the Helicon Focus stacking software package. The unlicenced app is free but only allows Jpeg image capture. I found that stacking jpegs gave good results, though in the end I did licence my version. A lot of people use Zerene, and fewer use Helicon Focus to stack images I have used both as trials and Helicon is definitely the Gold Standard from my point of view. Zerene is good though.


I stuck with CombineZP for a long while, because it is free, and more importantly, I didn't think it did a bad job in relation to Zerene. Now I use CS6 and have been quite happy with the results.

Ok ,regarding capture, I have found that in general, unless you can 'immobilise' a subject for a significant period of time, it is difficult to achieve a good sequence of stacked shots with a tethered setup. Basically, I found that automated stepping is a slower process than can be achieved manually.

The flip side of that issue is that precision with manual changes using a focussing rail is more difficult. I have considered experimenting with a step motorised focussing rail, but the setup is fairly expensive and I have not really been able to convince myself it's a 'must have'. I have used my setup for other subjects though, and achieved reasonable results. I have attached an example of raindrops on a rose stem as an example.